Get fresh music recommendations delivered to your inbox every Friday.
We've updated our Terms of Use. You can review the changes here.

PESS003 - Boreal Massif - We All Have An Impact LP 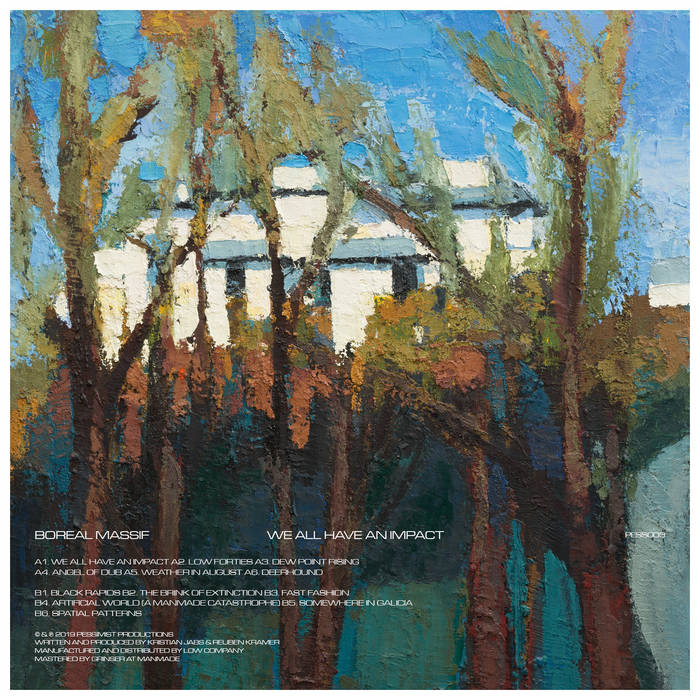 The calls of birds and insects give the album a haunted, living quality, as do the sounds that grind against the more mechanical clicks and blips. Dark beats let an almost trip-hop vibe at times.

This fusion of organic and inorganic elements works beautifully, conveying a sense of the conflict that persists between humanity and the natural world.

This album has an impact. Favorite track: Black Rapids.

Following the success of the Pessimist & Karim Maas LP, the no-fuss Pessimist Productions imprint reveals its third release. Boreal Massif is the collaborative effort of Pessimist and Loop Faction, and here they present their debut full-length LP, We All Have An Impact.

Focusing on the destruction of the natural world and our ecosystems, We All Have An Impact… shows there can be more to electronic music than a shallow and empty narrative. Built from field recordings and a deep reservoir of trip-hop / drum & bass influences (think B12's Electro-Soma, vintage Mo Wax records...), Boreal Massif's raw, unpolished anarcho-electronics offer a blueprint for the next generation of new age music.

No Fuss label founded in 2018 by Kristian Jabs. Intended strictly for Pessimist's own productions, collaborations and experimental projects.
Distributed by Cargo Records

Bandcamp Daily  your guide to the world of Bandcamp

sndtrak stops by with an Album of the Day Feature of his most recent release, FLIPS V1: Triple Lindy